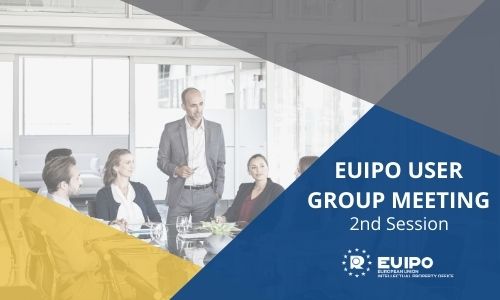 On 28 October, the Office hosted the second online session of the 29th User Group meeting.

The meeting gathered 20 representatives of 14 User Associations. This annual event is an official forum in which representatives from the User Group gather to exchange views on EUIPO’s strategic activities and projects, in particular those activities with a direct impact on users.

This second online session aimed at presenting the evaluation of the results and benefits of the ECPs under SP2020, followed by an overview of the state of play of the European Cooperation Projects under SP2025 and the recent developments after the Working Groups which took place in the first week of October. EUIPO’s Deputy Executive Director, Mr Andrea Di Carlo provided the global context and the latest developments on the general update on SME initiatives, which also included the draft proposal for the creation together with the European Commission of a Fund to support SMEs in 2021 to be later on submitted for the approval of the MBBC, and an update on the outcome of the first Working Group meeting of the ECP6 “Supporting SMEs” and its next steps.

The presentation on the project “Broaden the Cooperation Framework outside the EU” and an update on the implementation of the EU-funded projects closed this second session of the 29th edition of this forum.

The first online session of the 29th User Group meeting was held on 14 October. The Executive Director, Mr. Christian Archambeau opened the meeting by giving first hand information on the impact of COVID-19 on the Office’s activities and its users, as well as an outline of the upcoming strategic and institutional agenda. The meeting was then dedicated to exchange views with the users on the closure elements of SP2020 and the strategic projects initiated within the SP2025 in 2020 as well as those that will be proposed for 2021, with the focus on advanced customer-centric services and initiatives under Strategic Driver 2, introduced by the Deputy Executive Director, Andrea Di Carlo. The session also included an overview on the latest case law of the Boards of Appeal and the General Court counted upon the presence of the President of the Boards of Appeal, Theophile Margellos. This session was then followed by an update on the changes to the draft Guidelines. The meeting finished with an update on the latest developments related the impact of Brexit in the Office’s practice.

The Office continues to do its utmost to maintain its direct channels of communication and discussion with the User Group adapted to the current circumstances and through virtual platforms.