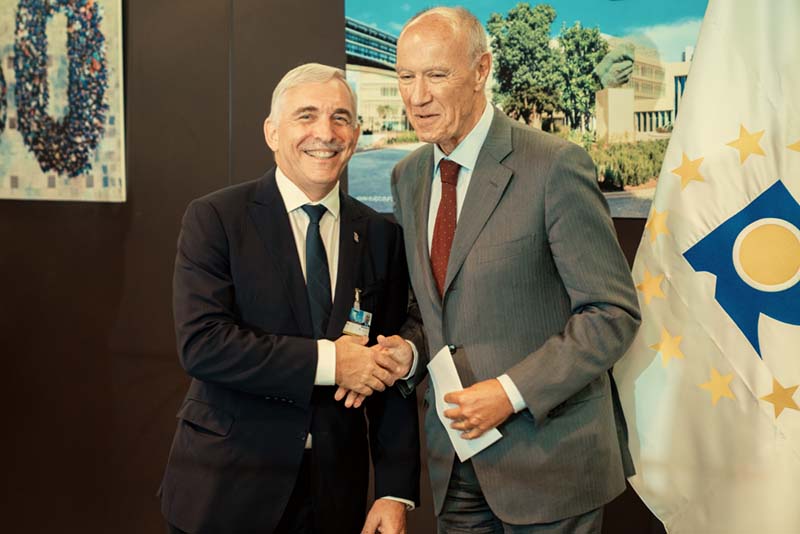 A delegation from EUIPO, led by the Executive Director, Christian Archambeau, held 30 bilateral meetings and four joint events with the heads of non-EU intellectual property offices, including WIPO and other regional organisations such as ARIPO and OAPI. The meetings took place in Geneva from 30 September to 3 October 2019.

The meetings enabled the EUIPO to reach out to 73 IP offices in total, including candidate and potential candidate countries, TM5 and ID5 partners, and other regions of the world with which the EUIPO has bilateral cooperation agreements or with which cooperation activities will soon be launched. These 73 IP offices represent overall 23.92 % of all EUTMs and 14.06 % of all RCDs, respectively.

With the occasion of the WIPO General Assemblies, the EUIPO organised a special side event in cooperation with WIPO, a photo exhibition to mark the EUIPO’s 25th anniversary. The aim of the exhibition, entitled ‘25 Years EUIPO – Protecting / Creativity’, was to share the history of the EUIPO with all the IP offices attending the General Assemblies, as well as the success of the registration systems, which have supported innovation and creativity in the EU and beyond since its inception.

In addition, the EUIPO delegation participated in the launch of the ‘Guidelines to using evidence from research to support policymaking’. Over the past two years, the EUIPO has participated in the network of IP economists, coordinated by WIPO, in order to develop this set of best practices for conducting economic studies (and other empirical studies).

The EUIPO delegation reviewed the current status of the technical cooperation projects with the Office’s partners and jointly agreed on future steps.

Integration into the EUIPN tools, the status of implementation of EU-funded projects (IP Key Latin America, IP Key SEA, ARISE+ IPR and IP Key China) and the future EU-funded projects (CARIFORUM, the Pan-African project and the project in Georgia) were the main points of discussion with international partners.

Furthermore, the TM5 and ID5 cooperation projects were also discussed with the IP offices of China, Japan and the US.

In the framework of the Strategic Plan 2020, this event falls within Line of Action 4 and contributes towards the development of the ‘Extension of tools and support to the Observatory in non-European countries’ project.