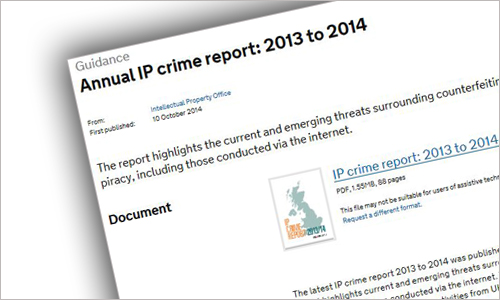 The UK IP crime group published on 10 October its annual report, covering existing and new developments related to counterfeiting and piracy, notably those developed via Internet. Next to data and statistics on enforcement activities from UK enforcement agencies, police and customs authorities as well as industry associations, over the period 2013/2014, the report also highlights the importance of cooperation between enforcement agencies, government and industry and the general public. Collaboration with the public has significantly increased over the last year which suggests a growing awareness of IP crime among the general public, with a number of 2,423 IP crime reported from Crimestoppers (an independent charity which assists law enforcement in locating criminals and solving crimes, passing on intelligence and tips from the public) to the Intellectual Property Office’s Intelligence Hub, accounting for a rise of 25% compared to the previous year.

According to a survey of UK consumers, 90% of respondents believed that counterfeiting is morally wrong. Yet 18% admitted that they sometimes buy fake alcohol and 16% fake medicines.

These results are in line with the results of last year’s OHIM study on European Citizens and Intellectual Property: Perception, Awareness and Behaviour which revealed that at European level, 96% of citizen believe it is important to protect IP as it supports innovation and creativity and 75% deem it unacceptable to purchase counterfeit products. Correspondingly, this significant awareness does not seem either to translate into individual behaviours, as one third felt that buying counterfeit goods can be justified for various reasons, which measures the challenge ahead to change behaviour.

To read the report and for further information, please click here.

We use cookies on our website to support technical features that enhance your user experience. We also use analytics. Click for more information
x
Всички незаписани промени ще бъдат изгубени